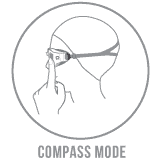 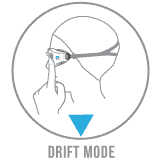 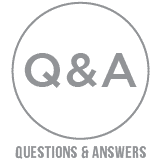 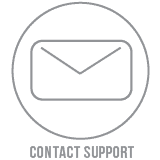 In Drift Mode, OnCourse Goggles first leverage the electronic compass used in Compass Mode to determine the orientation of the swimmer’s head prior to starting a swim and then during the swim. The system compares the compass heading to the stored target bearing to provide feedback to the user. In Drift Mode, storing the target bearing also establishes a trajectory or line of navigation from the start point. Once this line of navigation has been established a variety of other sensors including a GNSS (GPS + GLONASS) module are then activated and this GNSS (GPS) data is combined with compass and accelerometer data  to determine if the swimmer has drifted laterally due to currents of water or wind. These combined methods provide varied feedback to the swimmer for angular and lateral deviation using GNSS (GPS + GLONASS) positioning data. In Drift Mode, the forward compass heading, back bearing from start point and distance from the line of navigation are monitored for deviation.  OnCourse Goggles can also be operated using the compass only, when in Compass Mode.

Drift Mode is customizable and requires a higher level of understanding, calibration and testing prior to use, which is specific to the user. There are times when a swimmer’s brain can be fooled by their dominant eye, thinking that a target is centered in their vision, when it is actually several degrees of to the left or right. For this reason and since compass accuracy is critical for Drift Mode, a method exists in the software for the swimmer to test and establish an offset for their dominant eye.

Prior to each use, OnCourse Goggles must be fully charged.  The goggles are charged with a provided micro-USB cable and any USB Charger capable of providing 5 Volts DC. When inserting the micro USB cable into the goggles, care must be taken to insert the plug into the connector so that the locking pins (or teeth) are facing the front of the goggles (away from the swimmer). The cable should never be forced into place, but rather gently inserted.

Note the two different types of feedback in the table below, that are provided while using the Goggles in Drift mode.

Sometimes, a swimmer will turn their body excessively in which case,all three LEDs are flashing in both left and right eyepieces. In this case the user has rotated their head or torso in a way to deviate more than 70 degrees from the stored target bearing. The user should make a major correction to re-orient their head and torso, or store an entirely new target bearing.

In Drift Mode, more sensors are activated in the Goggles to monitor for drift and alert the swimmer if there is lateral drift. If the swimmer maintains their head or torso within the basic deviation from the stored target bearing, they can still find their way off course over time, or even sooner due to currents of water or wind.  In this case, the yellow LED will flash in the respective eyepiece to alert the swimmer that they have drifted off course slightly to the left or the right. To correct, the swimmer would continue to swim, but  simply turn their head slowly and slightly in the opposing direction and the body will follow. The LEDs will switch back to green when on course. Now, if the swimmer were to drift even further to the left or the right of the line of travel,  the LED will change from flashing yellow to flashing red in the respective eyepiece indicating that the deviation is even more severe from the intended line of travel. Correction is basically the same. To correct, the swimmer would simply turn their head slowly and slightly more tin the opposing direction and then the body will follow. As correction occurs, the LED will change from flashing red, to flashing yellow and then finally back to green as the swimmer pivots to align with the stored bearing.

The Goggles can be turned off by pressing and holding the OnCourse logo for two seconds. In addition, using the same sensors that monitor the position of the user’s head, a timer will automatically turn the Goggles off after three minutes of inactivity.

OnCourse Goggles get results. At half the cost of a wet suit, and less than one tenth of the cost of aerodynamic bicycle wheels, OnCourse open water swimming goggles will help you swim straight in open water and can deliver up to a 15% performance improvement, even for an accomplished swimmer. We analyzed a variety of performance enhancing gear such as swim skins, wet suits, aerodynamic helmets and aerodynamic bicycling wheels. Nothing compared to the time savings that are realized during triathlons by swimming in a straight line in open water with OnCourse Goggles.

Read all of the OnCourse Goggles Reviews